Gawie Combrinck and Gerrit de Vries, riding as the aptly named Uncle Fish team overcame damp conditions to win a very challenging Trans Baviaans Repeat; on Saturday, 17 August. The second event in the 2019 Trans Baviaans stable, which followed the same 230 kilometre course from Willowmore to Jeffery’s Bay, was contested in testing weather. Combrink and De Vries best battled the head wind, muddy roads and a brief rain squall to cross the finish line, at the Fountains Mall, in a time of 9 hours, 25 minutes and 20 seconds 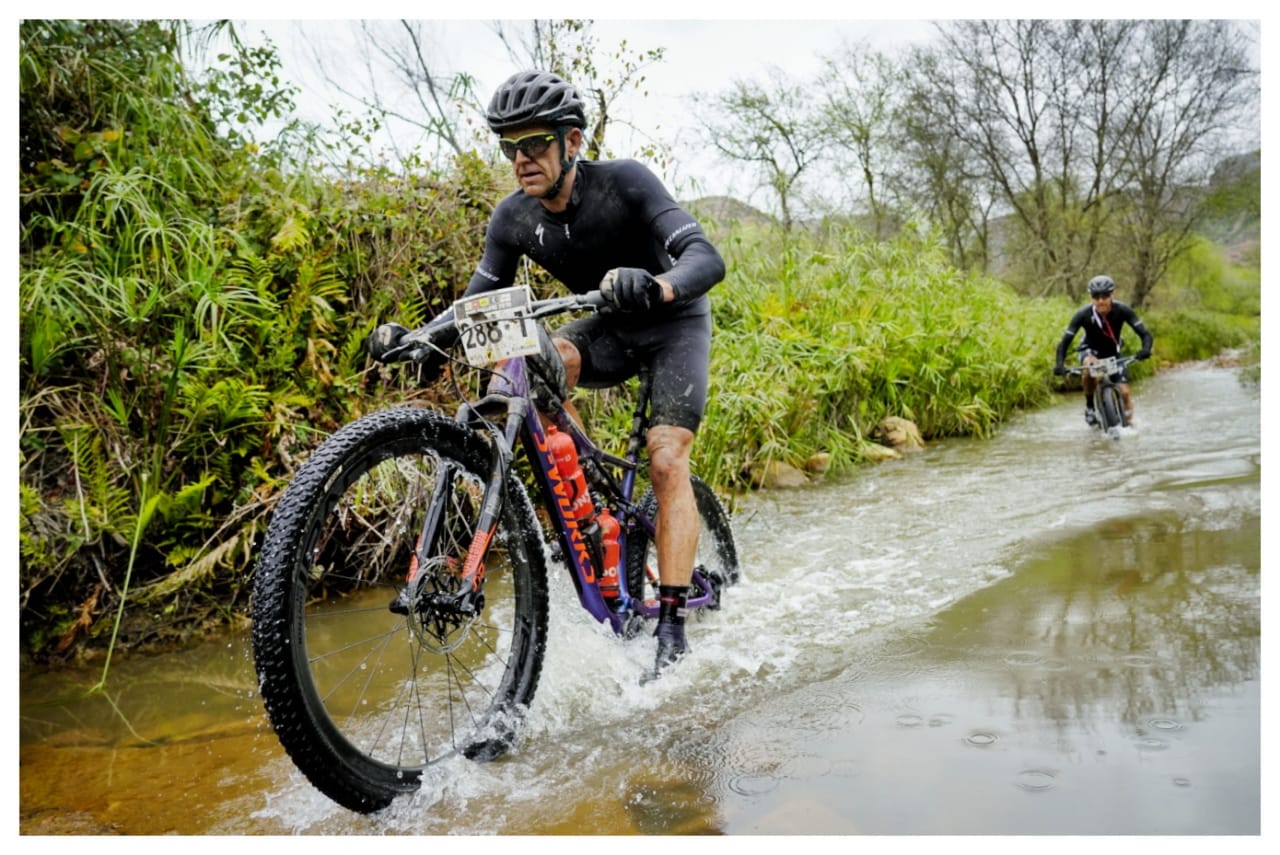 Combrinck has only recently retired from elite mountain biking, but showed that he was still the pedigree rider in the 1 250-rider strong field. The former NAD Pro MTB rider, who has been spending long hours riding his gravel bike in the Low Veld this winter, put the years of mileage to great use. “Gawie was the only rider working for the first 100 kilometres today” his partner De Vries praised. “We went it alone from Check Point 2 (at the 93 kilometre mark) and just rode tempo. Gawie worked for probably 220 kilometres, I did about 10. So, it was all Gawie today” De Vries recounted. Chipping in Combrinck added, with a laugh: “Unfortunately I have it on a GoPro where Gerrit rode away from me on a climb, so I won’t hear the end of that”.

Behind the race winners the Trans Baviaans Repeat riders battled in, splatted with mud and grateful to be out of the wind. “It was just the wind which was a killer” Garth Ennion, of ESA Partner, said upon sealing second position. “The temperature was actually alright.” “Head wind all the way, except for the last 5 kays” his teammate Wesley Lentz was quick to point out. “Ja”, agreed Ennion with a rueful smile, “except for the railway line singletrack.” 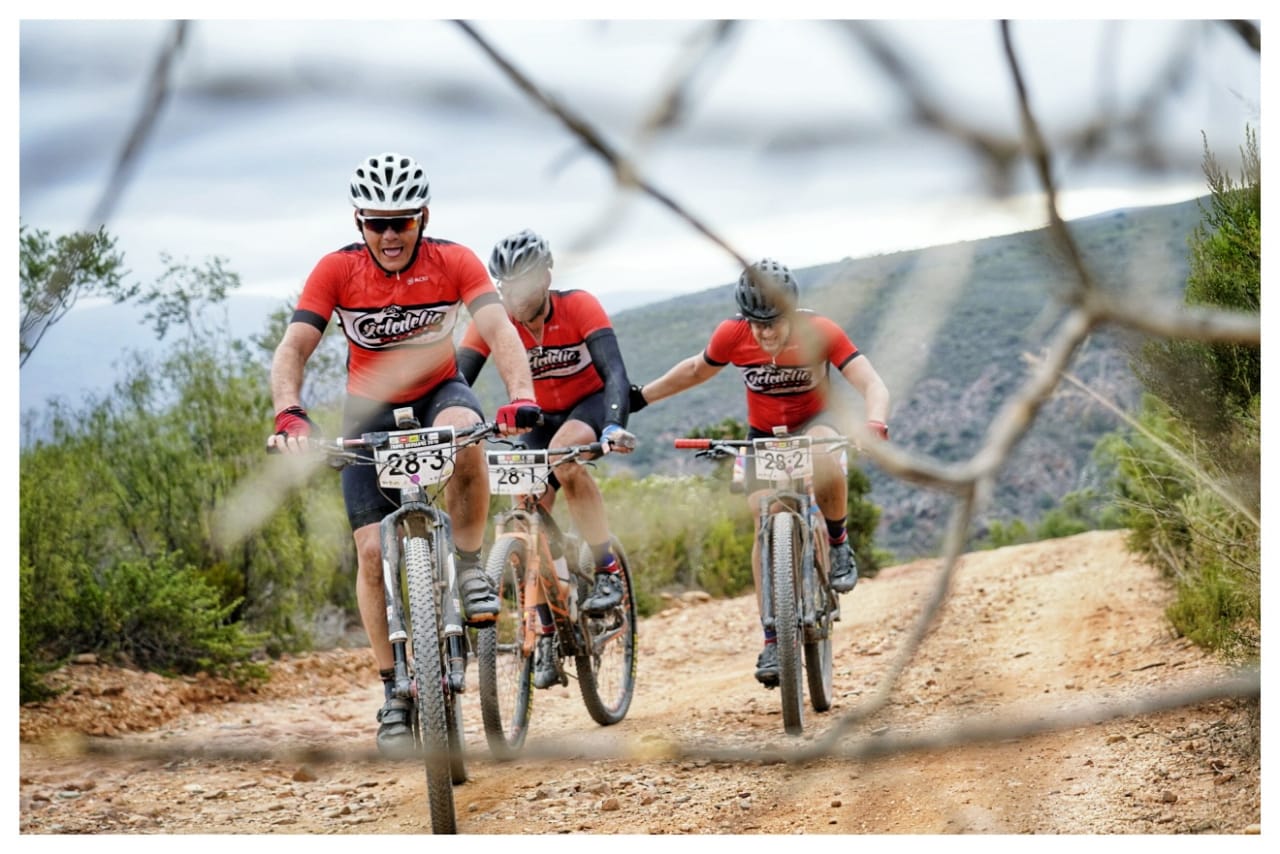 The challenging weather conditions ensured that team spirit came to the fore even more than usual during the 2019 Trans Baviaans Repeat. Photo by Jacques Marais.

A little further down the field the famous Trans Baviaans team spirit came to the fore. Riding for the event’s official apparel partners, Ciovita, Jaco Pelser and Raymond Cox had a longer and harder day than they had anticipated. “Ray had a terrible day. I had to pull him all the way” Pelser said with a grin at his teammate. “The road was definitely not smoother and that headwind was brutal. I’m shattered!” he finished; before setting hungrily to work on the post-Repeat Spur burger, chips and a Darling Brew beer.

While the times were significantly slower than in the previous weekend’s Race one new record was set in the Trans Baviaans Repeat. Bryan and Lauren Allot, riding as Team PowerBar 2, became the first riders to complete the event on gravel bikes. The couple are preparing for the 1 000 kilometre long Munga in December. “I figure if I can do this then the Munga will be just as easy” Bryan smiled a little nervously on the start line in Willowmore. “There might be no suspension, but you get rattled around anyway. The corrugations are always smoother on the other side of the road. But it’s a photograph ride, we are aiming to take it easy and enjoy it.” The Allot’s did just that, finishing in a steady time of 17 hours, 53 minutes and 56 seconds. 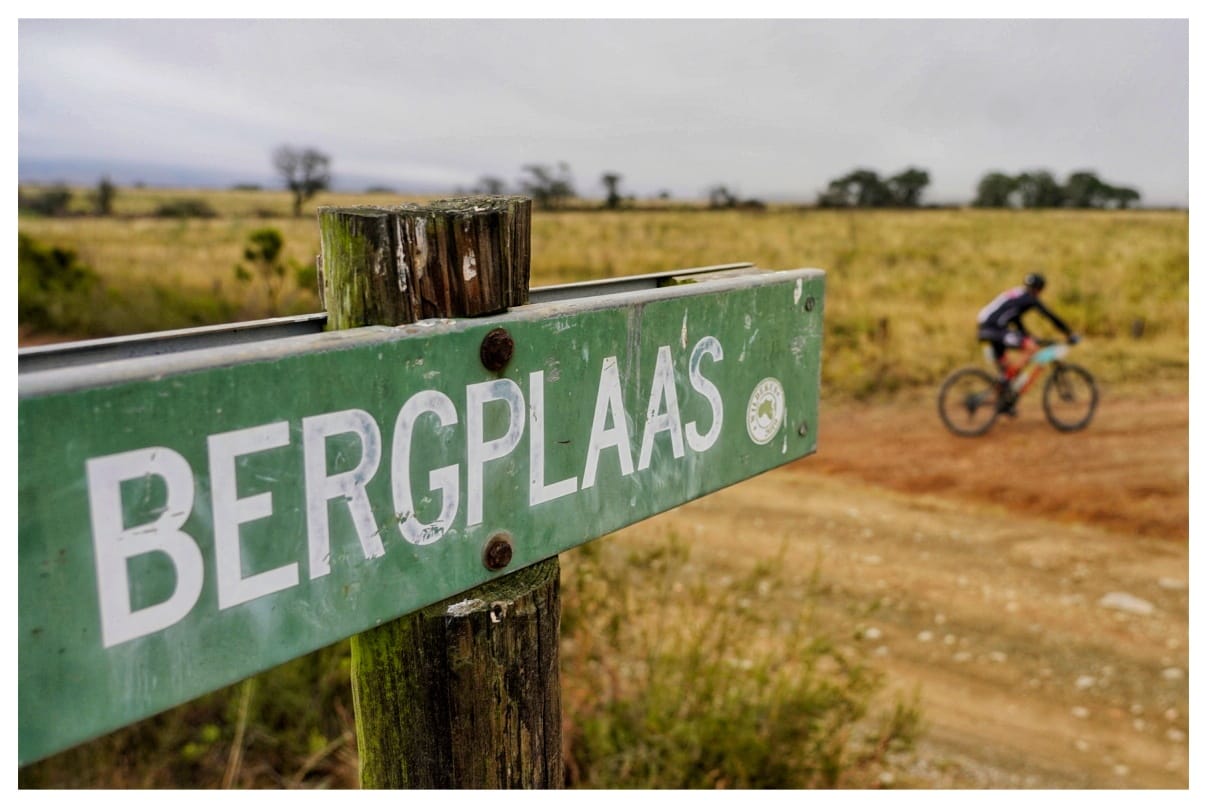 From Bergplaas at the 140km mark the route to Jefferys Bay was muddy in places following the, much needed, rain the region experienced that morning. Photo by Jacques Marais.

It was arguably not the year to take on the Trans Baviaans on a gravel bike though. “It was the toughest one I’ve done in the last 12 years” Vickus Boshoff rated. Boshoff, who owns the Coimbra bike shop in George, has completed an event in each of those 12 years and knows a thing or two about surviving the Baviaanskloof. His and Jan-Paul Gerber experience in the event helped them to third overall, just two seconds ahead of the Pure Savage team of Waldo Zevenster and Malcolm Isaacs. Zevenster and Isaacs had by all accounts been two of the strongest riders in the field, but mechanical issues kept them off the podium. 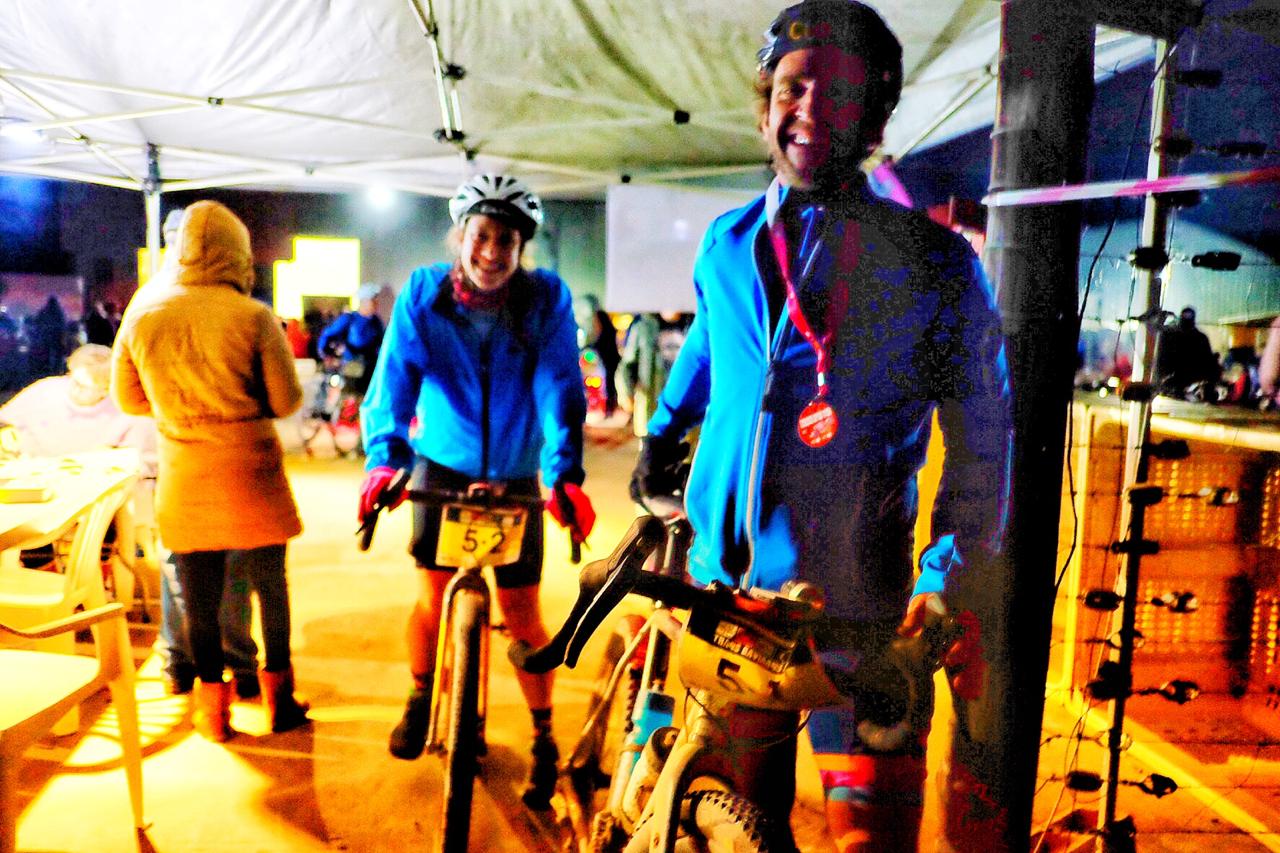 Bryan and Lauren Allot became the first riders to complete the Trans Baviaans on gravel bikes when they rolled into Jefferys Bay in the early hours of Sunday morning. Photo by Jacques Marais.

Like in the first weekend’s Race mechanical misfortunes played a significant role in the Repeat riders’ stories. Many failed to heed the warnings about the state of the road and the pre-race rain did not help matters either. A steady drizzle fell on the final 100 kilometres, from Bergplaas to the finish, in the morning before the first riders summited the Mother of All Climbs. From Bergplaas, at 140 kilometres in, to the finish muddy roads and a thick mist made the already challenging riding conditions even harder. Each and every rider who completed the Repeat should thus be justifiably proud of their achievement. 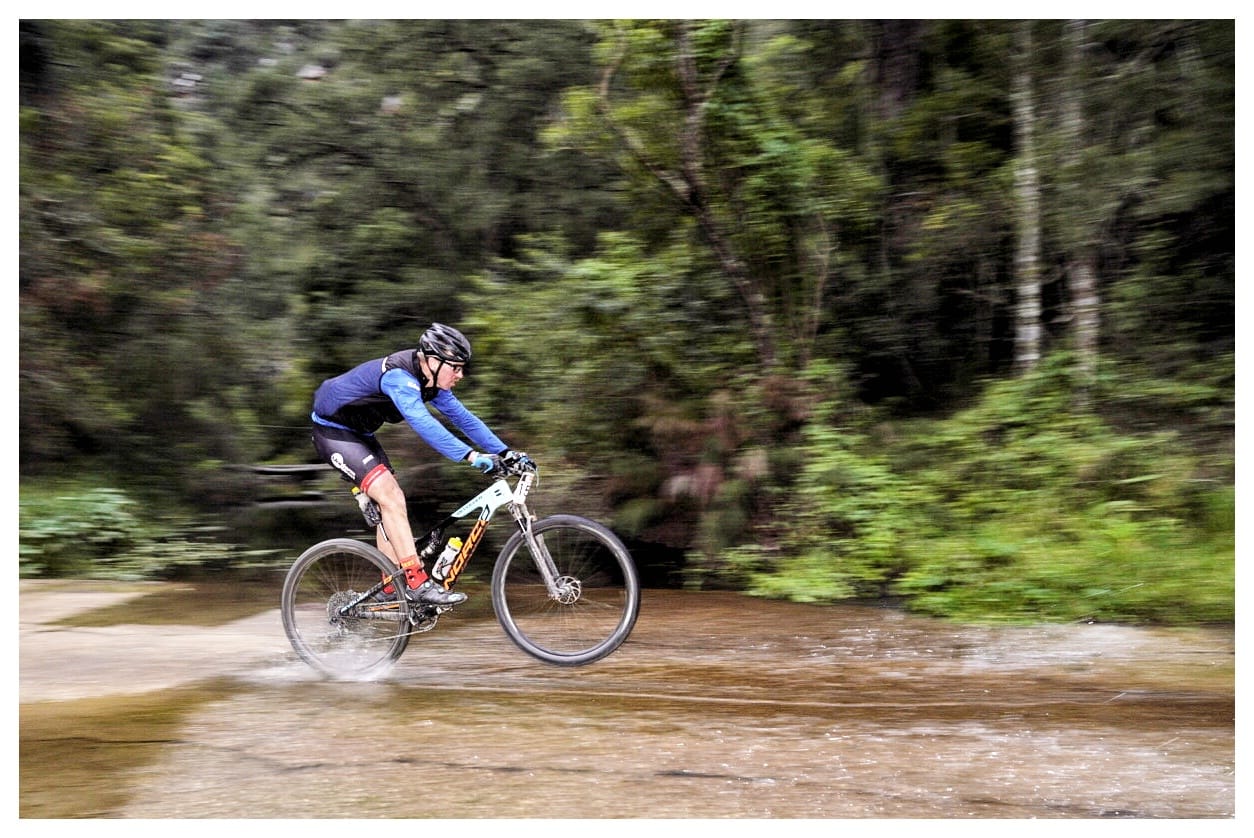 The water crossings in the forests between the base of the Big Dipper and Check Point 5 were deeper than they had been the week before, forcing riders to get creative to keep their feet dry. Photo by Jacques Marais

For the full results from the 2019 Trans Baviaans Repeat please visit: www.transbaviaans.co.za. 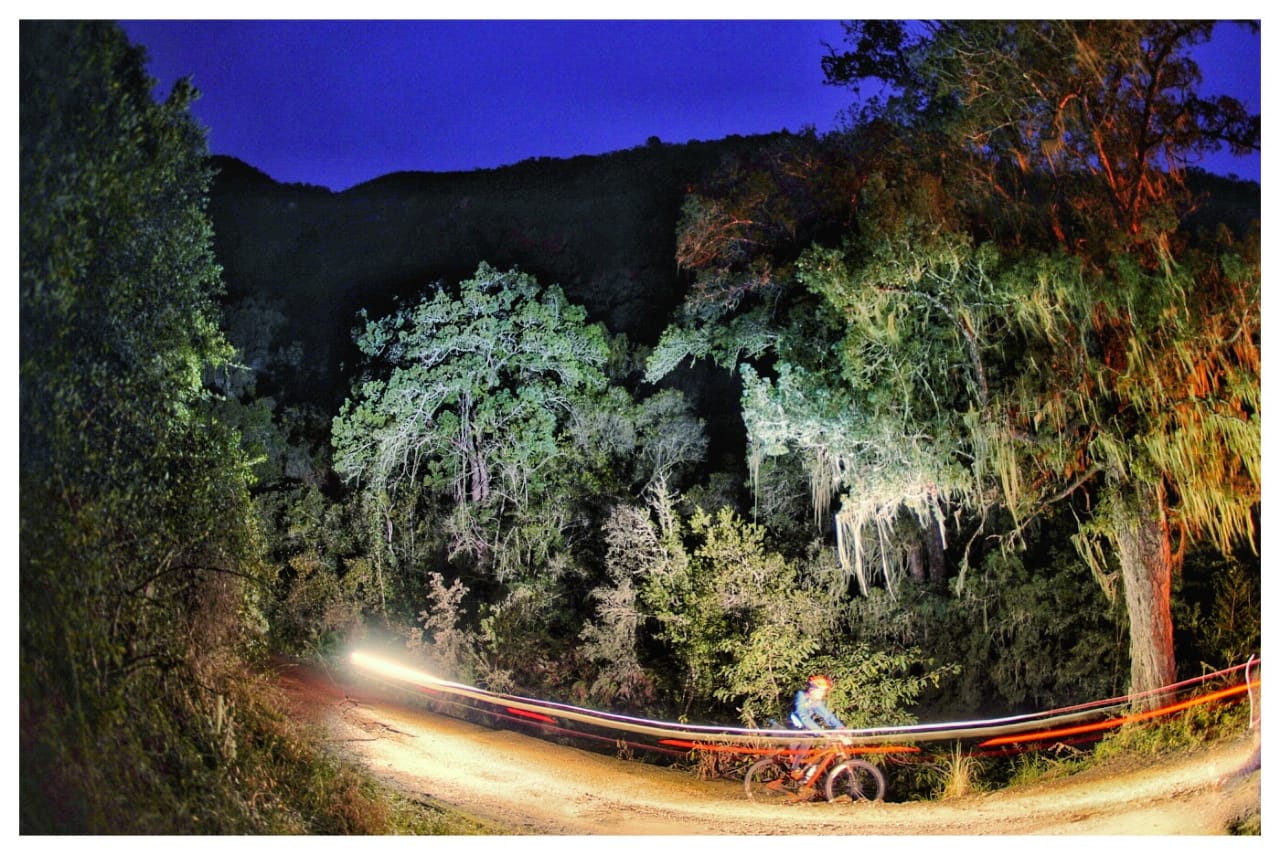