Over the sixteen year history of the Trans Baviaans the greatest topic of debate before each Race has been the road conditions. 230 kilometres is, by any cyclist’s standards, a long distance. On gravel roads and jeep tracks that link Willowmore to Jeffery’s Bay, via the Baviaanskloof, there is amble opportunity for the route to provide challenging surface changes. In addition to the already strenuous trial set by the deceptively attritional meters of accumulated climbing, which stack up despite the downhill trend towards the Indian Ocean. 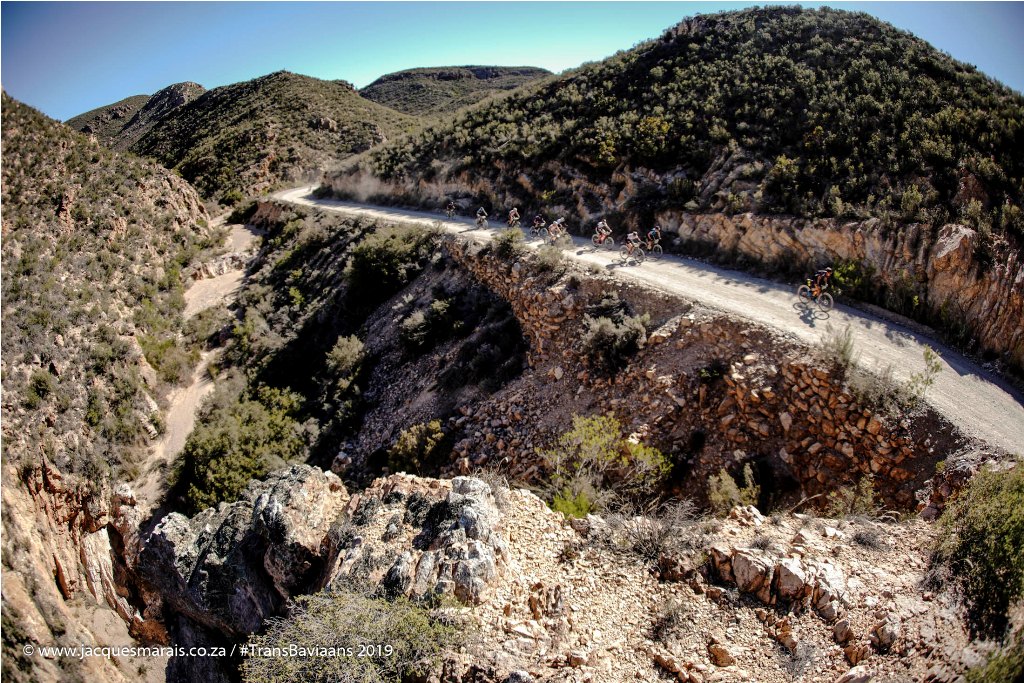 Repeat riders be warned: road conditions were particularly corrugated in the first 100km of the 2019 Trans Baviaans Race. Photo by Jacques Marais.

For the Trans Baviaans Repeat riders, who follow the tracks laid down by the Race competitors a week later, the road conditions hold no mysteries. The Race, which took place on Saturday 10 August, saw dormakaba and Galileo Risk win in dominant fashions. Neither team were able to match their times from 2018 though. This Saturday, 17 August, the Repeat pits another 1 250 riders against the roads of the Baviaanskloof.

“It was similar to the first one we did together [in 2017]” Sarah Hill said to her partner Theresa Ralph after sealing the 2019 Trans Baviaans Race victory. That opinion, the general consensus is, underplayed the roughness of the route though. “There were five broken rear derailleurs by Check Point 1” William Rhodes revealed. As one of the men married into the Trans Baviaans organising Van Der Walt clan Rhodes has been co-ordinating the water point at Check Point 1 for nearly a decade. “I’ve never seen so many issues so early into the race” Rhodes added. 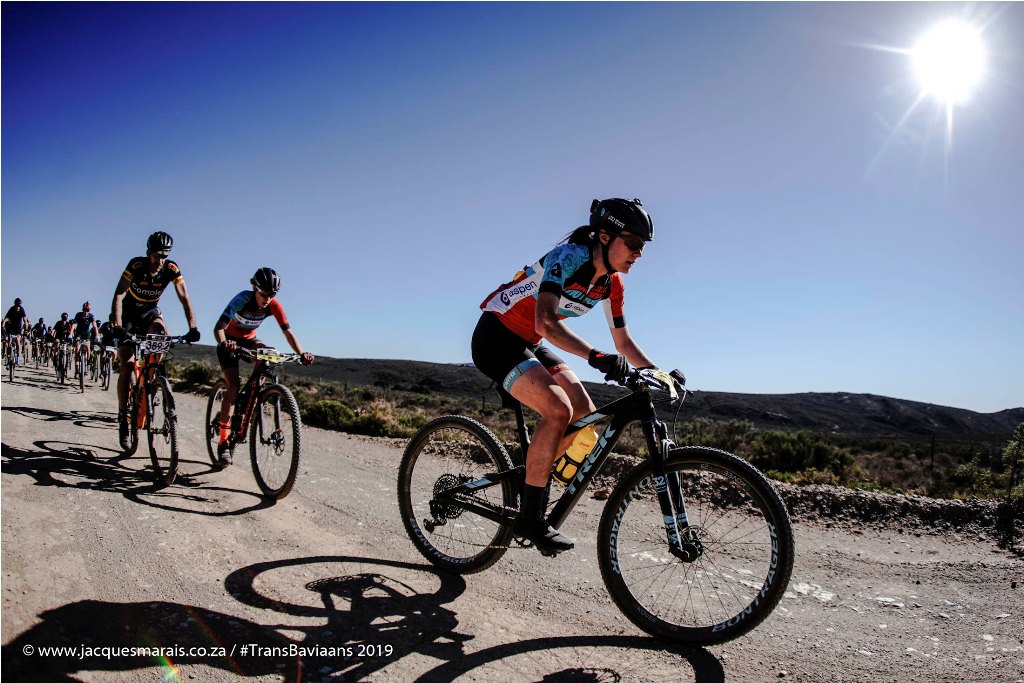 Christie Hearder (front) and Courtney Webb (behind) were two of the riders who struggled with rear derailleur issues. Webb finished the race with a makeshift singlespeed set-up after her second derailleur failure of the race with 40km left to ride. Photo by Jacques Marais.

“Wikus [van der Walt, the race founder] always says the route is bad” Race Director Zane Schmahl said. “It’s a mountain bike race and the section through the reserve is always rough. Since the concrete strips were put down on the Fangs and MAC it has got a little easier though. That, the freshly graded roads leading to the reserve and a consistent tail wind led to fast times last year. This year there have been floods which damaged the road before the reserve. Though work has started to fix them there are still piles of gravel waiting to be graded into the road in places. The corrugations in the first 100 kilometres were particularly bad this year, as a result of those floods, and the rough section through the reserve is rougher than it has been in a number of years. That and the head wind from the start of the Neverender to the finish definitely slowed the times down.”

The rough road conditions and warm weather also led to an increased number of the top riders cramping. Hardly any of the fastest finishers failed to mention suffering from cramps. “Dezza [dormakaba’s Derrin Smith] started cramping with about 120 kilometres to go” Mike Posthumus recounted. “Later I started cramping too; but not as badly as Derrin, fortunately!” “With the temperatures reaching twenty five degrees Celsius and the tail wind blowing, I think it dehydrated people more than they realised” Schmahl speculated. 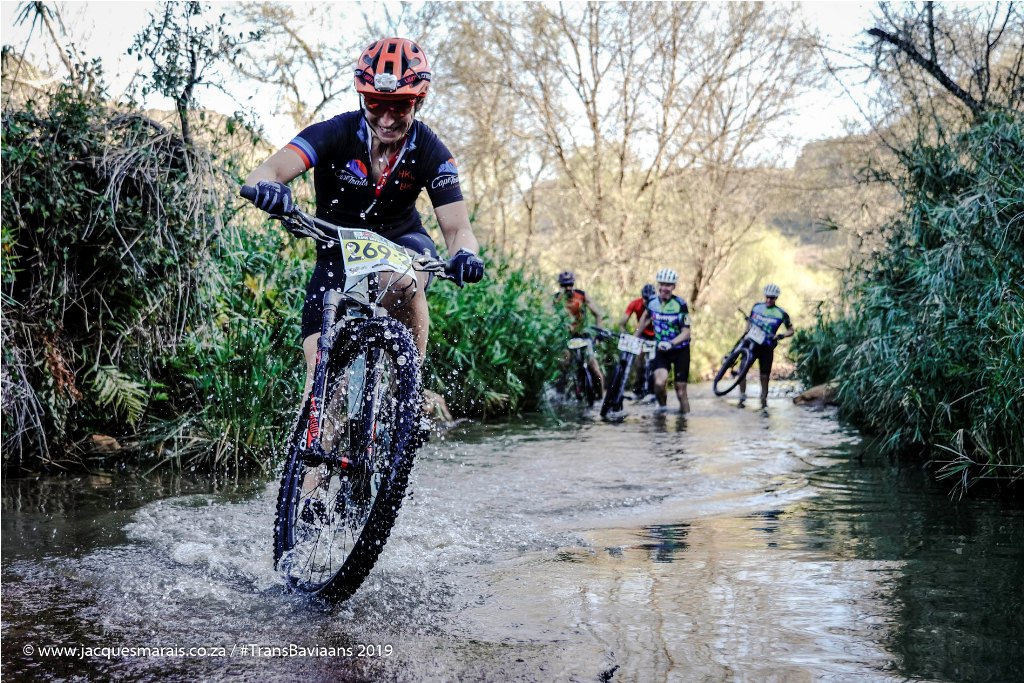 The infamous Langwater water crossing, after Check Point 3, forced virtually everyone to walk as it was deeper than usual this year. Photo by Jacques Marais.

Fortunately for the Repeat riders they have the experience of the Racers to call upon. They will therefore be prepared for the rough roads. Worcester’s Manic Cycles manned the service station at Check Point 1, where Vero’s famous rooster brood is usually the only reason for riders to stop. “We suggest that all Repeat riders have their rear derailleurs checked properly. Make sure the pulleys are still in a good condition and that all the bolts are fastened properly” the shop tweeted on Sunday, after the Race.

The weather conditions will hopefully also contribute to smoother day out for the riders this coming Saturday. No rain is predicted to fall during the event, but the temperatures are expected to be lower – peaking at just sixteen degrees on Saturday afternoon. A cross-head wind is predicted for the first half of the race unfortunately, but that could force riders to remain in groups in the first 100 kilometres rather than striking out alone. Thereafter, once the route turns West towards Jeffery’s Bay after the Hadley Check Point, the riders can expect a gentle tail wind. 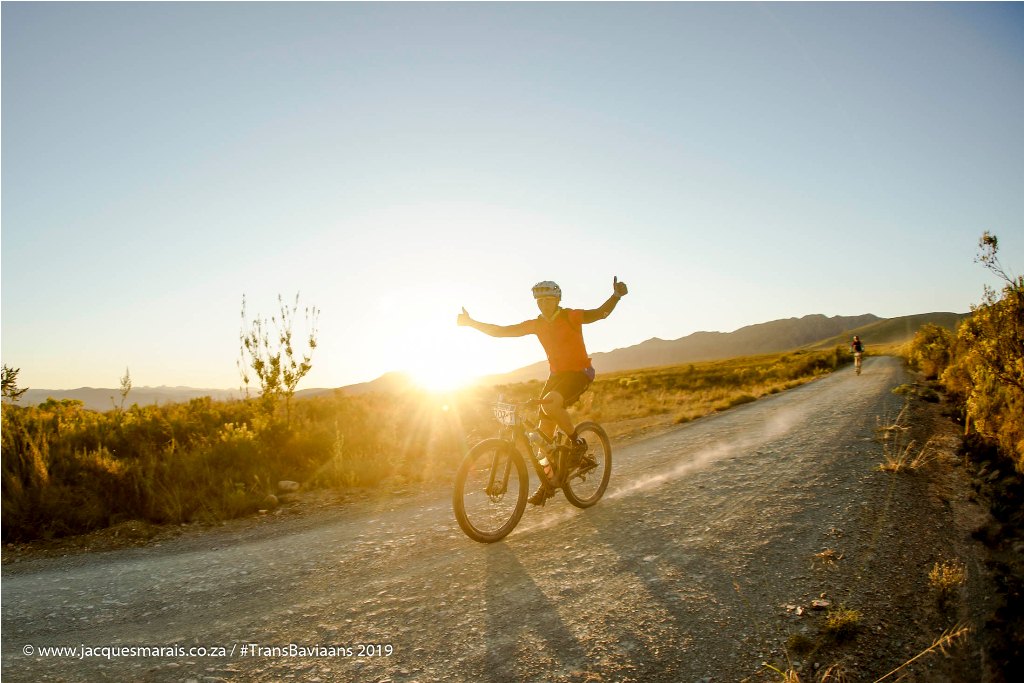 For those still nervous about what exactly lies in store during the Trans Baviaans there is no better way to mentally prepare than by recapping on what took place during the race. Riders and fans can view all the photos and videos from the Race on the event’s Facebook page, Trans Baviaans. Or relive the blow-by-blow account of how the Race unfolded on Twitter, at @EcoBoundEvents. More photos and rider experience posts can be found by following @transbaviaans or the hashtag #TransBaviaans2019 on Instagram. While all the other essential information is available on the website: www.transbaviaans.co.za.