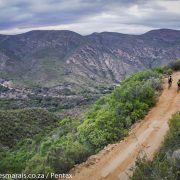 Trans Baviaans first timer Lourens Luus teamed up with old hand Billy Stelling to successful effect as the PowerBar 1 pairing rode to Trans Baviaans victory on Saturday 13 August. The race was the first of two weekends of Trans Baviaans action and joining Luus and Stelling on the top step of the podium were; Yolandi de Villiers, Johan Labuschagne and Neill Ungerer, of Ultimate Cycling TBC, in the mixed category and Theresa Ralph and Amy McDougall, of Galileo Risk Valencia in the women’s category.

The 230km race started at 10:00 in Willowmore on Saturday morning. A steady early pace was set by in large by the ASG Best-Med teams, with Labuschagne and Ungerer also doing turns on the front. The expected tail wind failed to materialise and instead a slight head wind kept the lead bunch together until around the 80km mark when the jockeying for positions heading into Check Point 2, at 104km, started. At Check Point 2 the experience started to show for teams like Ultimate Cycling TDC as they tended to navigate the potentially confusing check point zones; where riders had to check in, fill bottles, stock up on nutrition, collect essentials for the next leg from their check point boxes and check out again in good time. Stelling and Luus had clearly planned their check point strategy too and managed to minimize their time off the road.

Heading into the Baviaanskloof Nature Reserve the race started to splinter as first the Frangs and then The Mother of All Climbs (The MAC) took their toll. Up front Stelling and Luus were joined by the Altech-Autopage duo of Pieter Seyffert and Hanco Kachelhoffer. Behind them on the road the leading mixed team of de Villiers, Labuschagne and Ungerer were riding with the third placed men’s team of Steven Shirley and Juan-Pierre Minnie riding as team On Your Bike. A little further back the race for second in the mixed category was hotting up as the RMB Change A Life duo of Martin Dreyer and Jeannie Bomford had caught the Merrell Mixed trio of Craig Boyes, Timo Cooper and Nicky Gillomee.

Stelling appeared to be struggling up The MAC, so Seyffert and Kachelhoffer attacked in the final phases of the climb to claim the PowerBar King of the Mountain prize. However, once over the climb the four leaders all missed the Bergplaas check point at the crest of the climb and had to track back, nullifying the 20 second gap the Altech-Autopage guys had garnered. The first woman to crest The MAC climb and claim the PowerBar Queen of the Mountain was the high flying de Villiers.

Descending the Big Dipper Seyffert and Kachelhoffer again pulled a lead on Stelling and Luus, but Luus dug deep when they reached the kloof below to re-join the leaders. For the next 50km Luus sat at the front of the lead group setting a steady pace, while Stelling recovered on the back of the group. Heading up the Never Ender climb the race for outright victory appeared to enter a stale mate.

The Trans Baviaans is famed for its need for strong teamwork and in the final reckoning it was teamwork that settled the two closest battles. In the mixed category race for second the advantage of having three riders in a team allowed the Merrell Mixed trio to reel in the RMB Change A Life duo. Gillomee took turns hanging on Cooper and then Boyes’ pockets as they powered up the Never Ender passing Dreyer and Bomford. In the men’s race the decisive move came at the self-service Check Point 6. Stelling passed the check point tag to Luus in the approach to the check point and while the stronger Luus stopped to tag the PowerBar 1 team in Stelling continued up the road. The Altech-Autopage team stopped together, but when Luus accelerated away from the check point to catch Stelling they were unable to hold his wheel. Despite having nearly 40km to race Stelling and Luus managed to hang on; eventually even extending their lead when Seyffert and Kachelhoffer eased off the pace in the closing kilometres once it became clear the pursuit was futile. The race-winning move was made at Check Point 6 where Pieter Seyffert waited for his Altech-Autopage teammate Hanco Kachelhoffer to complete the check-in process, alongside Lourens Luus, while Billy Stelling raced ahead. Photo by Seamus Allardice.

In the mixed category the Ultimate Cycling RDC team of de Villiers, Labuschagne and Ungerer crossed the finish line, at the Fountains Mall, hot on the heels of team On Your Bike, the third men’s team made up by Shirley and Minnie who they’d ridden with for most of the day. The trio’s victory was their fourth in the Trans Baviaans mixed category. Behind them Boyes, Cooper and Gillomee, of Merrell Mixed, finished strongly to claim second while the RMB Change a Life duo of Martin Dreyer and Jeannie Bomford were third.

The women’s category race failed to ignite into a racing spectacle when an early mechanical for Hanlie Booyens dropped her and her Tiletoria Ladies teammates, Fienie Barnard and Esther Lategan off the pace of eventual winners Ralph and McDougall. Riding on tired legs, following her recent Iron Bike stage race exploits in Italy, McDougall was not happy with the time she and Ralph managed. The very competitive pair would have liked to have challenged the mixed teams more closely, but it wasn’t too be so their attention shifted to enjoying the route and there surely could not have been a team who finished the first event of the 2016 Trans Baviaans with bigger smiles than the Galileo Risk Valencia duo. Closing out the women’s podium was the Ander Fairies duo of Franci Joubert and Lolita van Aardt. The MAC – A.K.A. The Mother of all climbs, snaking from the valley floor up into the clouds. Credit: www.jacquesmarais.co.za / Pentax.