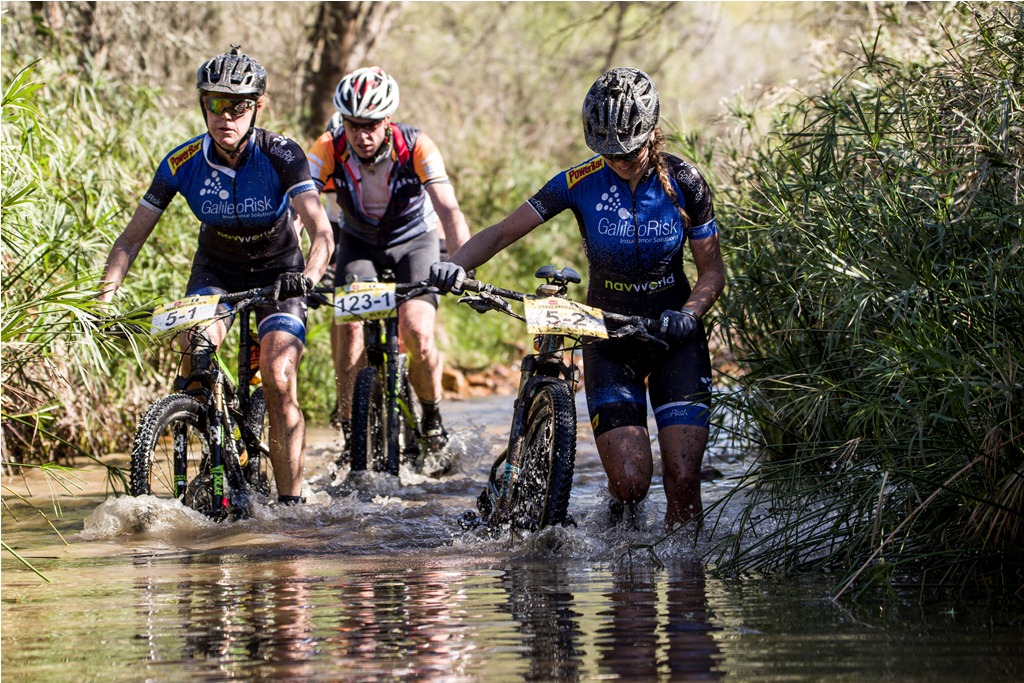 The Langwater is one of the Trans Baviaans’ iconic features and proves a great leveller – everyone even the elite riders like Theresa Ralph and Sarah Hill get their feet wet. Photo by Jacques Marais.

In the first weekend’s Race; the records tumbled with the Men’s, Women’s and Mixed Category course records being smashed, in perfect weather and road conditions. There was no lack of drama either however as the race leaders took a wrong turn and the CSA commissaire stepped in to share the victory and new record time between the DSV Pro Cycling team of Gert Heyns and Arno du Toit, and the Insect Science Garmin pairing of Timothy Hammond and Ben Melt Swanepoel.

Hammond and Swanepoel had crossed the finish line first, but Heyns and Du Toit had been leading the race for close on 200 kilometres when they went wrong. The results in the Women’s and Mixed Categories were fortunately less controversial; with Galileo Risk’s Theresa Ralph and Sarah Hill breaking Ralph and Amy McDougall’s course record by nearly an hour, and winning by well over two. Perennial Mixed Category champions’ Yolande de Villiers and Neill Ungerer, of Ultimate Cycling Knysna, knocked half an hour off their own record and finished an impressive seventh overall on their way to their sixth category win. 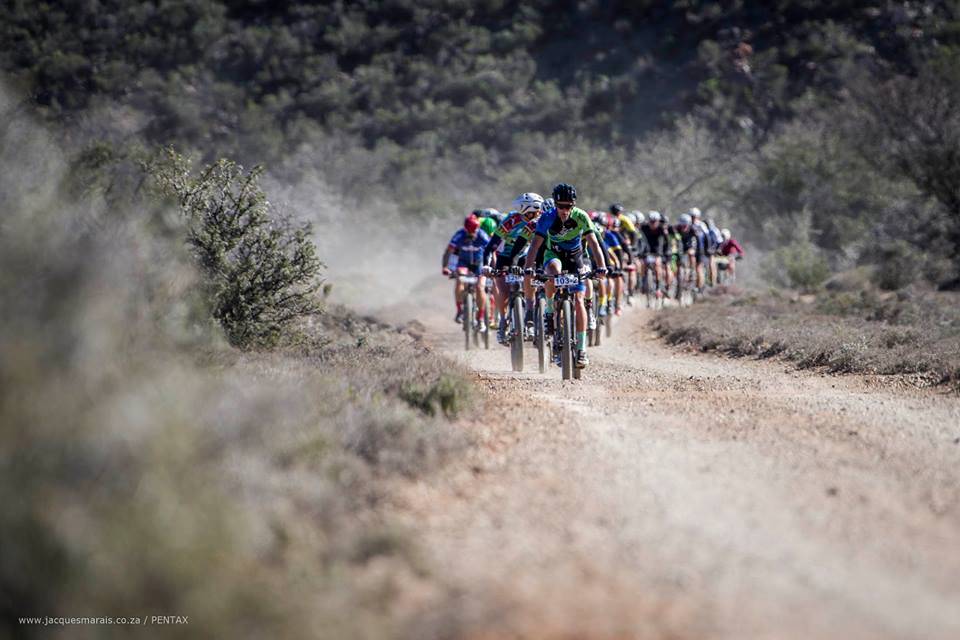 While the elite riders racing for category glory gained the majority of the attention the less competitive mountain bikers in the field also enjoyed a successful day out. The perfect conditions led to many a personal best and in total 389 teams and 1 057 individual riders finished the event. The fastest time was that of Hammond and Swanepoel; 7 hours, 51 minutes and 6 seconds. While the final finisher crossed the line at the Fountains Mall, in Jeffreys Bay, just before 8am on Sunday morning in a time of 21 hours, 51 minutes and 8 seconds. Eerily then there was an almost exact 14 hour time difference between the winners and the final finishers.

Reaching Bergplaas before sunset is an achievement worth celebrating. Photo by Jacques Marais.

The prize giving on Sunday morning after the Race saw the remarkable achievements of Berend Maarsingh and Dane Walsh honoured. The pair has each completed all 15 Trans Baviaans events to date! 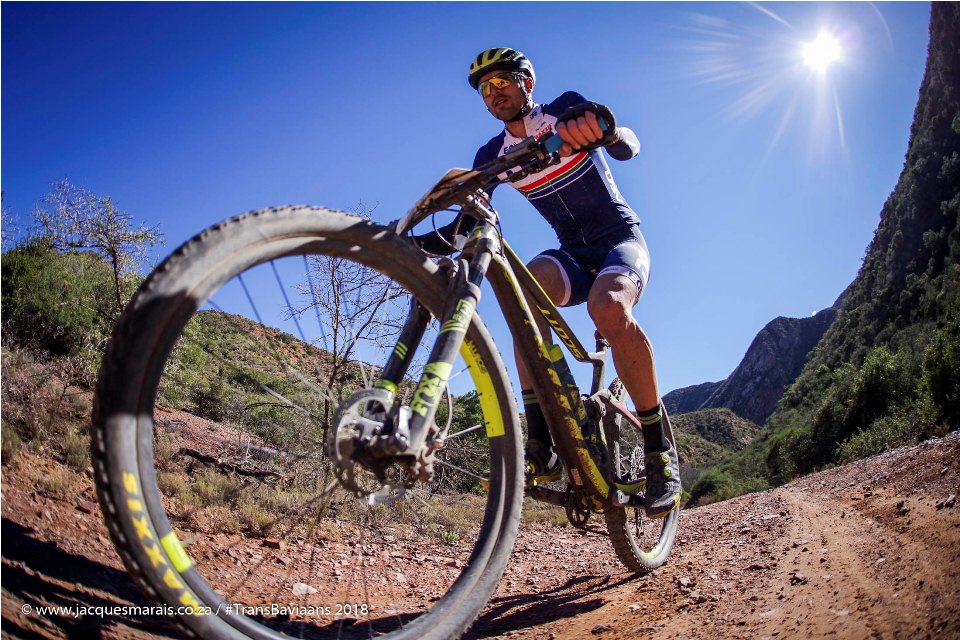 Gert Heyns off the front of the Trans Baviaans Race field. Photo by Jacques Marais. 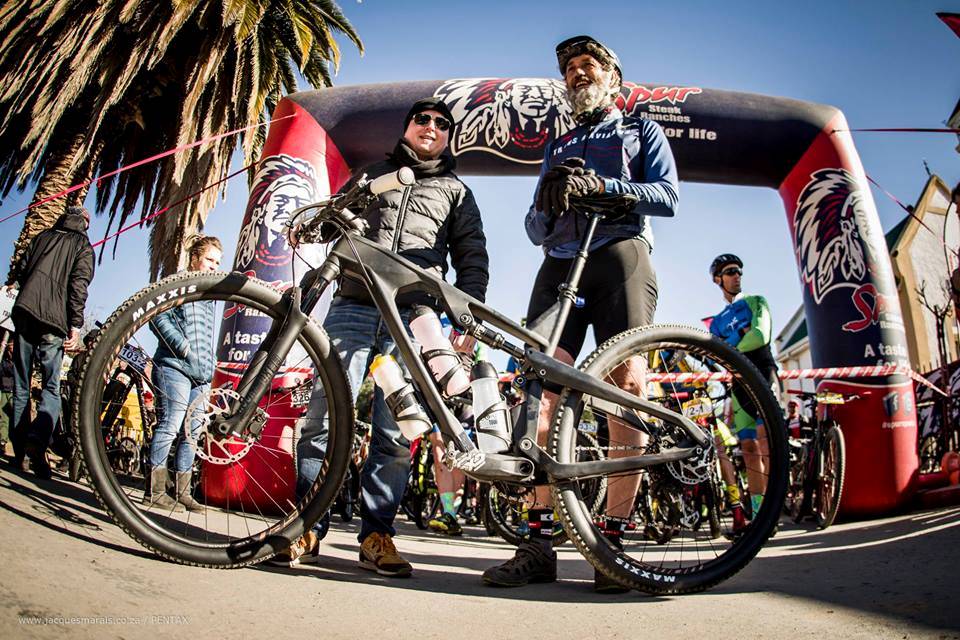 The story of the Trans Baviaans Repeat was that of event founder Wikus van der Walt taking the opportunity to ride the race he started fifteen years ago for the first time. Riding alongside John Sharples – his long-time friend, stage race partner and the man with who he recced the To Hell and Back route with 23 year ago – Wikus completed the 230 kilometre route in a commendable time of 13 hours, 25 minutes and 53 seconds. 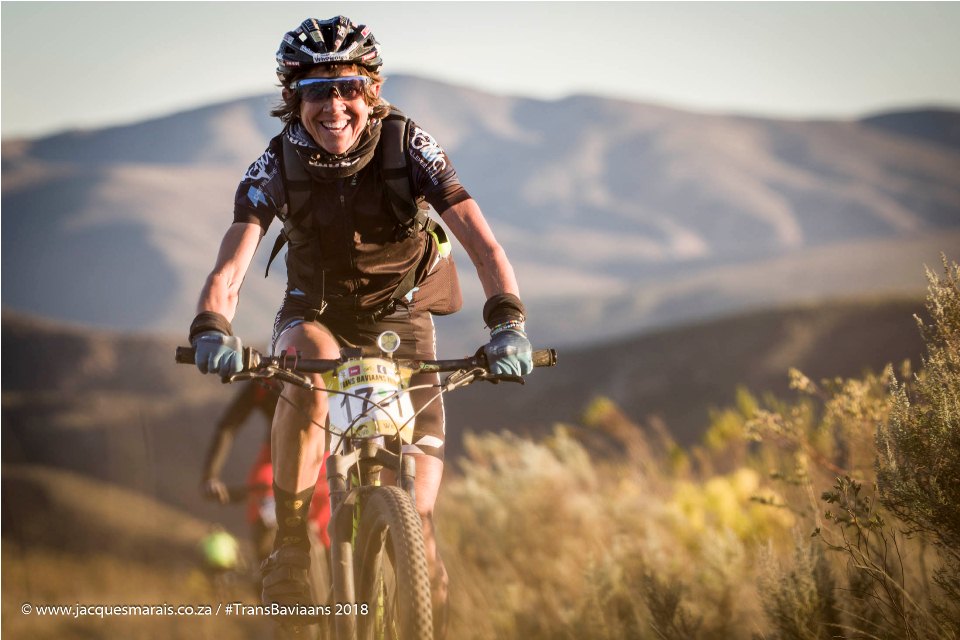 Hannele Steyn smiling all the way up MAC. Photo by Jacques Marais.

At the front of the Repeat there was another decisive wrong turn, by Ignus Oosthuizen and Jaco Davel which handed the victory to Johan Coetzee and Gys Malan in the Men’s race. The Mixed category saw Yolande de Villiers double up, claiming the Repeat title after the Race the weekend before alongside her husband Henties and the rest of her East Coast Cycles team; Kevin Taljaard and Wynand Mulder. The Women’s Repeat title was taken back to the Free State by Cherise Odendaal and Ilse Nel, riding as the aptly named Trans Vrystaat team. 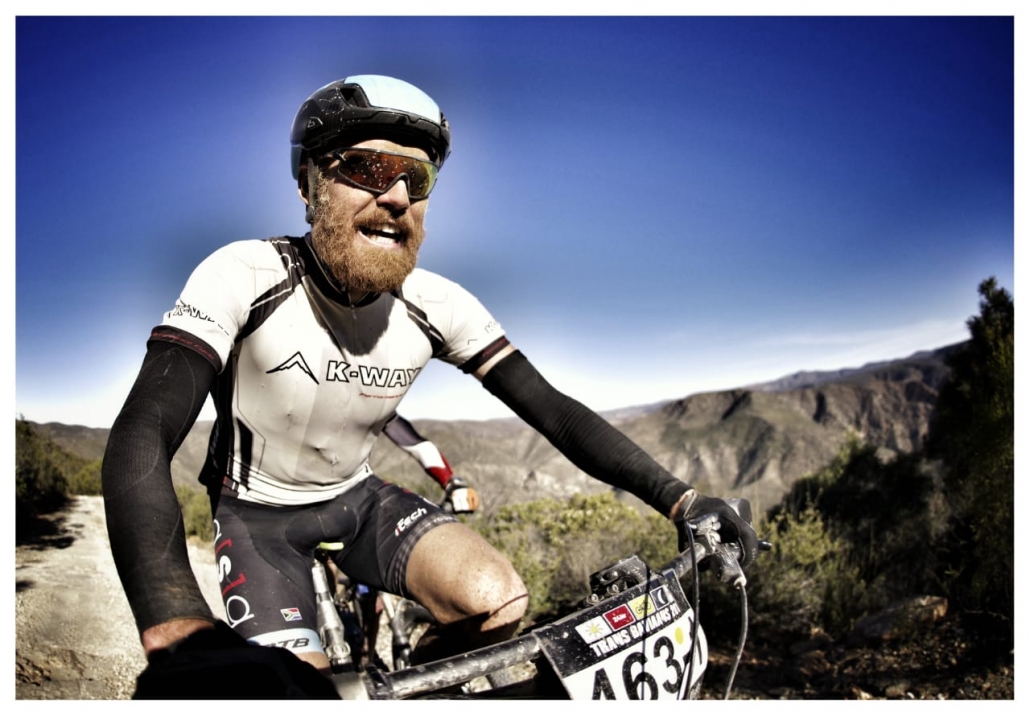 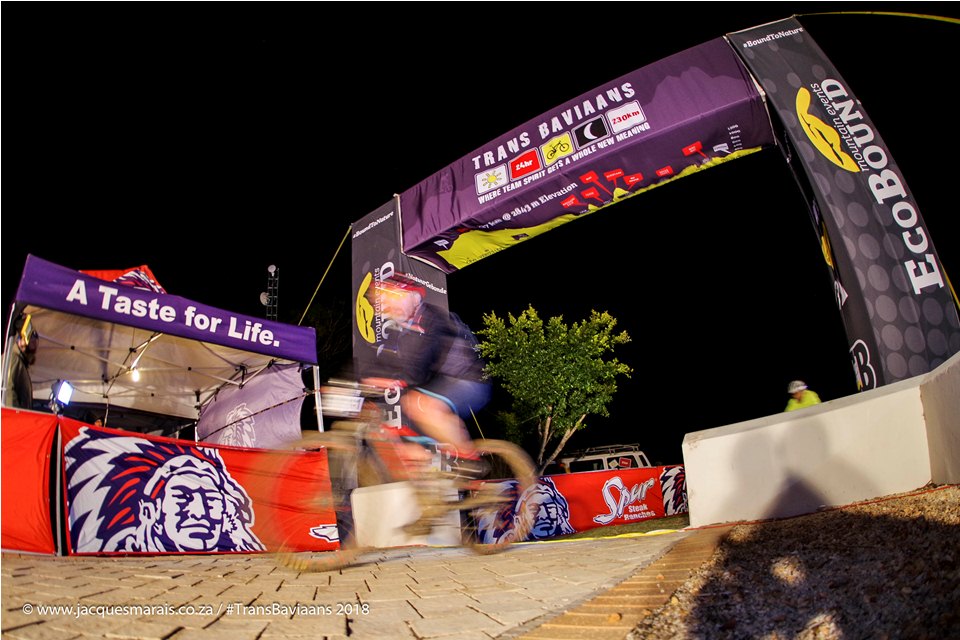 Crossing the finish line at the Fountains Mall can be an emotional experience. Photo by Jacques Marais.

The 16th edition of the Trans Baviaans will take place on the second and third weekends of August 2019. Entries are once again capped at 1 250 rides in teams of 2, 3 or 4. Entries to the iconic events will open on the 3rd of December 2018, for the Race, and the 4th, for the Repeat. 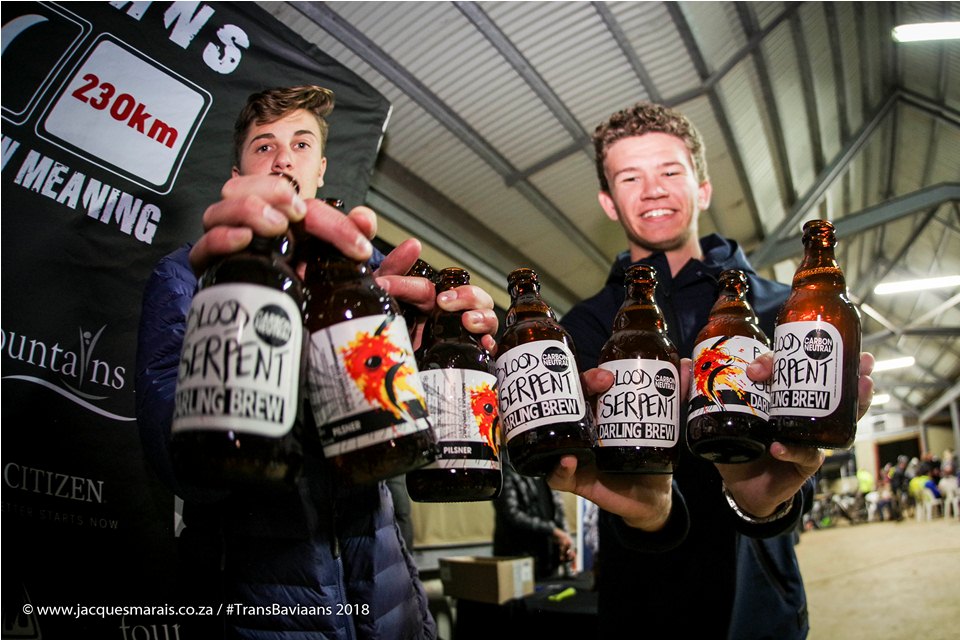