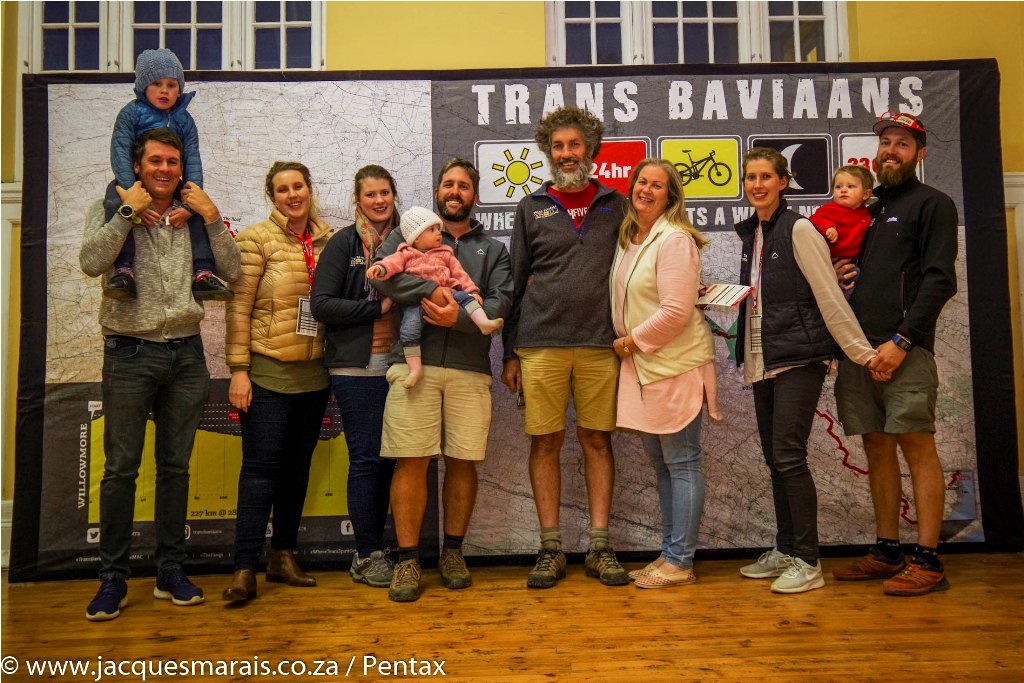 Wikus van der Walt is the patriarch of the EcoBound family. From left: William, Alexander (on William’s shoulders) Marelize, Nina, Terence, Maia (being held by Terance), Wikus, Elmarie, Carmen, Lukas (being held by Zane) and Zane . Photo by Jacques Marais.

Wikus van der Walt – the founder of EcoBound Mountain Events, the organisers of the iconic To Hell and Back and Trans Baviaans mountain bike races – will be making his Trans Baviaans debut in the 15th edition of the famous ultra-endurance race, when he rides the Repeat on the 18th of August. To make his traverse of the Baviaanskloof World Heritage Site and the 230 kilometres of the race route a little easier van der Walt will be taking part on the new Momsen Vipa Ultra. 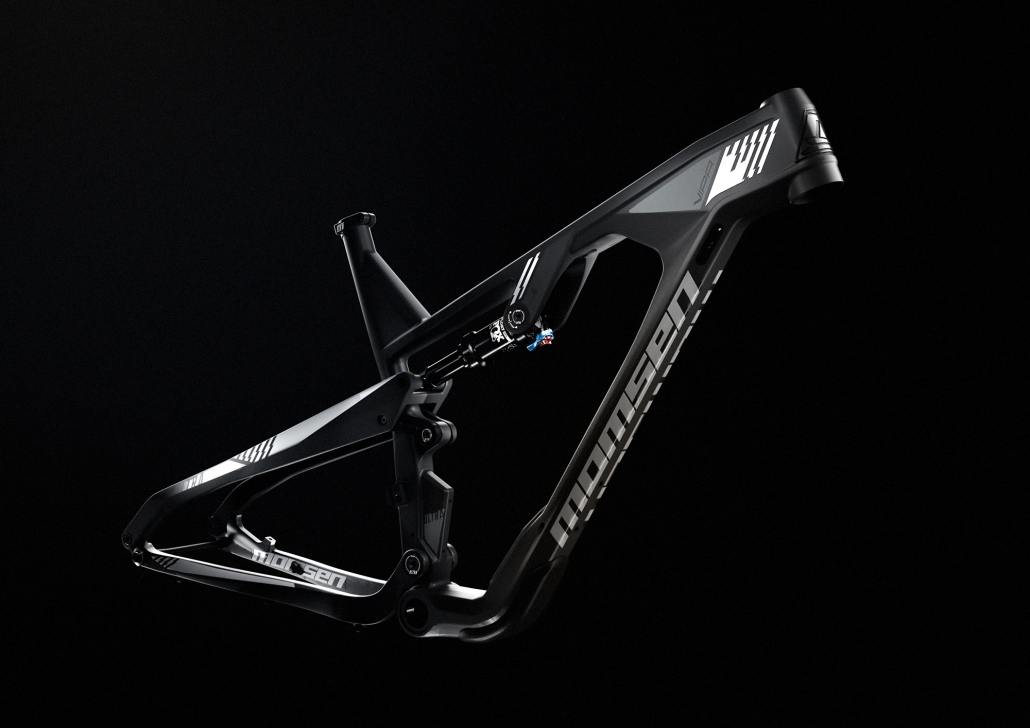 Over the years van der Walt has poured his passion for mountain biking into event organising and ensuring others get to experience his twin loves for the sport and the environment in which it takes place. Since 1995, when the first To Hell and Back took place, he has been a pivotal figure in the local mountain biking community. While his three daughters were at school van der Walt and his wife, Elmarie, were exceptionally active in the organising of age group racing – particularly in the Southern Cape.

Now with the Trans Baviaans running like a well-oiled machine he can delegate to his trusted team of children, their spouses and long-time crew members, and take the opportunity to experience one of the events he created for himself. He will be setting out from Willowmore alongside his partner for the initial To Hell and Back trial ride, 24 years ago, John Sharples and MP Heyns, father to one of the race favourites Gert Heyns. Do not be fooled into thinking that van der Walt is a stranger to riding a bicycle through the Baviaanskloof however. 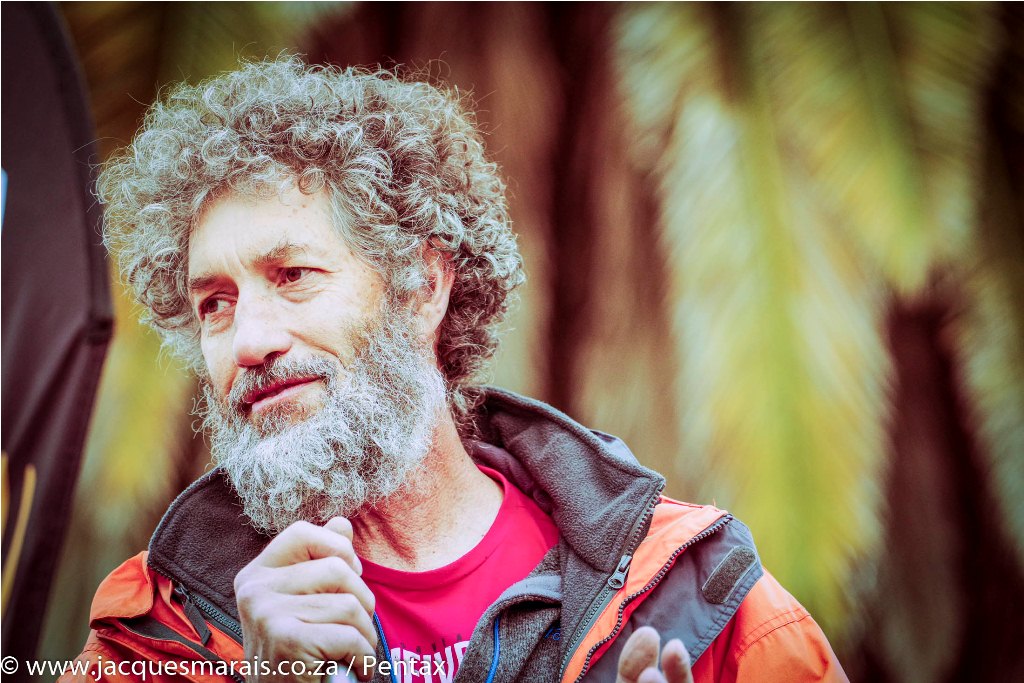 Wikus van der Walt and his famous beard, have been at the forefront of the South African mountain biking community since the inaugural To Hell and Back stage race in 1995. Photo by Jacques Marais.

He is a firm believer in the principle that an event should never take in a trail he has not ridden himself. Over the years he has ridden through the Baviaans numerous times on reconnaissance rides and most recently while undertaking the Freedom Challenge in June this year; though that crossing of the Baviaanskloof was done in the opposite direction and on a heavily loaded bicycle. Those recent memories and his new purposely endurance-designed Momsen Vipa Ultra are sure to make his Trans Baviaans ride a far more enjoyable experience. 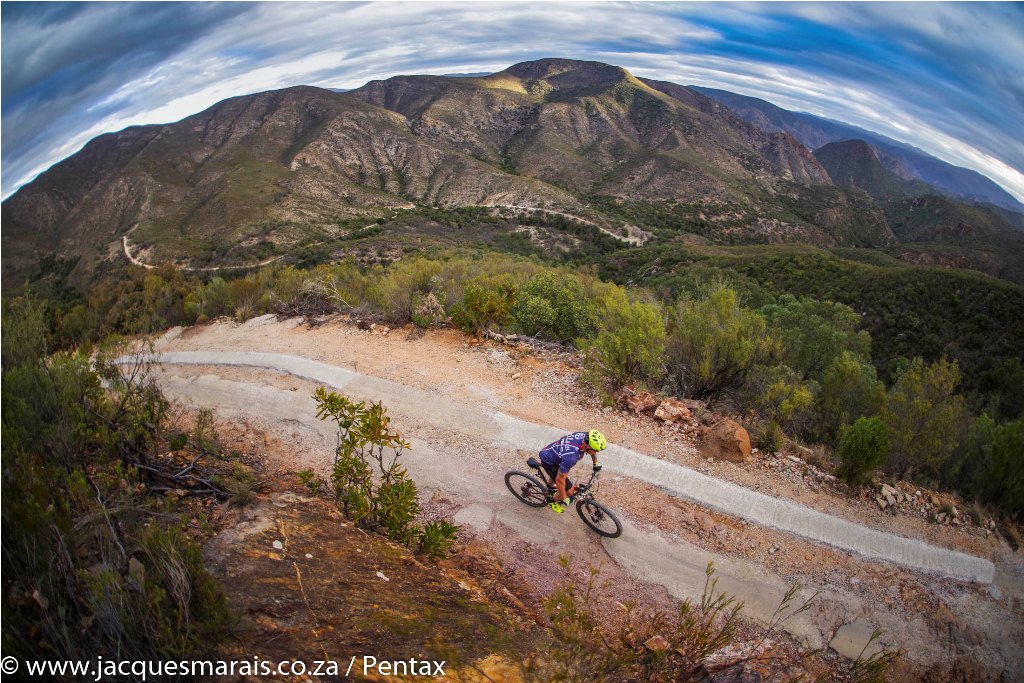 Wikus van der Walt and his fellow Trans Baviaans riders will need to conquer the Mother of All Climbs en route from Willowmore to Jeffreys Bay. Photo by Jacques Marais.

Designed and developed by EcoBound’s bicycle partners, Momsen Bikes, the Vipa Ultra is a complete reengineering of the original Vipa full suspension mountain bike platform. Showcasing the modern trend for full suspension race bikes to feature longer top tubes, slacker head angles and more capable performance in technical terrain the Vipa Ultra is not only lighter than its predecessor the Vipa Race but is also more comfortable (now with 100mm rear wheel travel) and confidence inspiring. Key to an ultra-endurance event like the Trans Baviaans is the Vipa Ultra’s ablity to fit two bottle cages inside the main triangle and the presence of integrated storage compartments in both the top and down tubes. It is a bike that not only lives up to the Momsen motto of “Forged in the untamed” but is superbly equipped to conquer the Baviaanskloof. For more info on the Momsen Vipa Ultra you can go to their website www.momsenbikes.com or follow them on social media: Facebook & Instagram 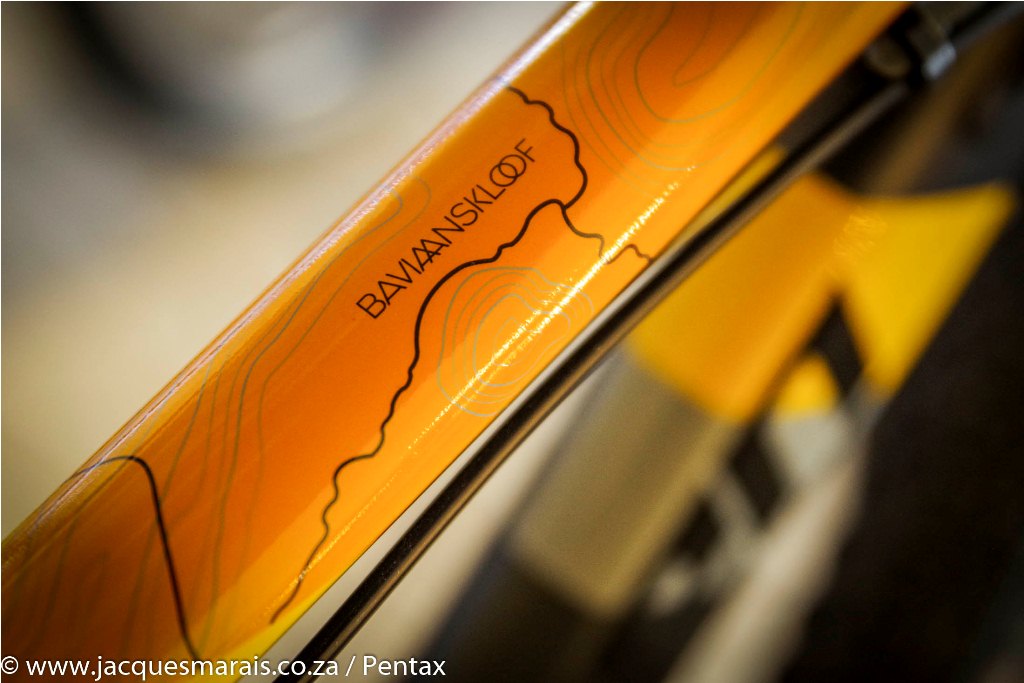 The production models of the Momsen Vipa Ultra have been kept carefully under wraps, but their predecessors the Vipa 2 proudly sported the contours of the Baviaanskloof on their top tubes. Photo by Jacques Marais.

“After 15 years of organising the event, I look forward to taking part in my first official Trans Baviaans, to experience the highs and lows of the event with my fellow riders,” van der Walt said. “I’m especially looking forward to doing this event on the brand new Vipa Ultra as it is a bike made and developed for this type of riding” he concluded.

The 2018 Trans Baviaans takes place over two weekends in August, with the Race starting on Saturday the 11th and the Repeat the following weekend on the 18th. Mountain biking fans can follow Wikus van der Walt and his fellow riders’ progress throughout both events online at www.transbaviaans.co.za or on social media, by liking the Facebook page, Trans Baviaans, following the Instagram handle, @transbaviaans, and following the EcoBound Twitter handle @EcoBoundMTB.

Preparing for the Biggest Ultra-Endurance Race of the Year